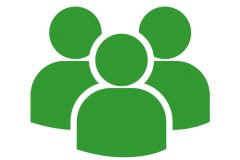 Hosanna David grew up in a very harsh economic environment and was raised by a single mother. As a young boy who refused to give up in life, Hosanna David engaged in farming and menial jobs in order to advance his education. After a fatal accident that led to the amputation of his left leg, his pains evolved into a deep passion to help the physically challenged especially amputees, children with club foot, out of school children and the aged.

As this desire burned in his heart, he received divine inspiration from God, and realized that He did not need to become very wealthy before he could reach out to those in need. He found a friend, Dr. Dubem Ekwo, who also had the passion for helping the disabled, and they both set out on mission to improve the lives of physically challenged people and less privileged children, through technical aid, financial aid, and scholarships.